One of our pupils has designed their own game. They have been sharing the game with other pupils in the class.

Pupils had an amazing time at the Rocksteady concert. Here is an impressive homemade top:

On November 4, 1922, a team of archaeologists led by Howard Carter discovered a step that marked the entrance to King Tutankhamen's tomb. When King Tutankhamen's tomb itself was discovered on November 26, 1922—after more than 3000 years of uninterrupted repose—some believed the pharaoh unleashed a powerful curse of death and destruction upon all who dared disturb his eternal slumber.

Like any urban legend, the alleged curse grew to epic proportions over the years...

In English we created our own posters using SUPERLATIVES to warn people about the curse.

Here are our posters:

We hope that you enjoyed watching Buzzards' Parent Assembly. We enjoyed performing to the parents. One of the highlights was when we did an Egyptian style Dragons' Den. Thank you for making the time to celebrate the childrens' learning with them.

As a class we learnt how to edit and improve our work. Here we are editing and improving diary entries that we wrote as Howard Carter when he discovered Tutankhamun's tomb.

WHAT A WONDERFUL WORLD!

Pupils had an amazing time learning about our world of wonder! They did a variety of activities:

2. Invented an animal that was adapted for the African climate

Pupils were incredibly lucky to have the sun shining today. It enabled them to have a rather wonderful day. They did a whole range of activities.

First, they used toilet paper to mummify themselves:

Next, pupils had a go and making their own style papyrus paper with Hieroglyphics:

Finally, we had the best time doing a whole class Egyptian scavenger style hunt. Pupils had to solve clues that were written in Hieroglyphics and collect words that would help them find the tomb of the Pharaoh...

They had to avoid traps... They did an amazing job!

A talented pupil from Buzzards' class created this spectacular picture! It is currently on display. Please feel free to come and marvel at it...

ECO DAY- BEING KEEN TO BE GREEN

Pupils have had the best time celebrating being eco.

1. First, we dressed in GREEN

2. Next, pupils watched a magician who imparted knowledgeable facts about REDUCING, RECYCLING and REUSING

3. Finally, Buzzards pupils invented a device that could save the planet and then prepared their own persuasive television adverts

Preparing and performing our ECO adverts

We've had a great afternoon using Egyptian Hieroglyphs to write our own words. The Egyptian writing called hieroglyphics used pictures to represent different objects, actions, sound or ideas. There were more than 700 hieroglyphs. Some pictures stood for whole words.

Can you use them?

What words can you make?

One of the reasons that we can use Hieroglyphs is because of the Rosetta Stone.

Today, the Rosetta Stone, which measures about 44 inches tall and 30 inches wide, is housed in the British Museum in London, where it’s been since 1802, except for a temporary re-location for safekeeping during World War I to an off-site, underground spot.

The Rosetta Stone helped scholars at long last crack the code of hieroglyphics, the ancient Egyptian writing system. Napoleon Bonaparte’s Egypt campaign discovered the stone slab in 1799 while  near the town of Rashid (Rosetta). The artefact came into the possession of the British after they defeated the French in Egypt in 1801.

The stone features a decree issued in 196 B.C. The decree on the stone is written three times, in hieroglyphics, which was used mainly by priests; in ancient Egyptian demotic, used for everyday purposes; and in ancient Greek. The use of hieroglyphics died out after the 4th century and the writing system became an enigma to scholars.

Pupils had a go a designing some pictures of Tutankhamun on REAL papyrus.

Pupils have come up with some amazing pictures!

Our beautiful finished pieces of work

They have also conducted an experiment to see if what type of chocolate would melt first.

Pupils first asked a question, then came up up with a prediction (hypothesis). Next they thought about keeping the test fair: 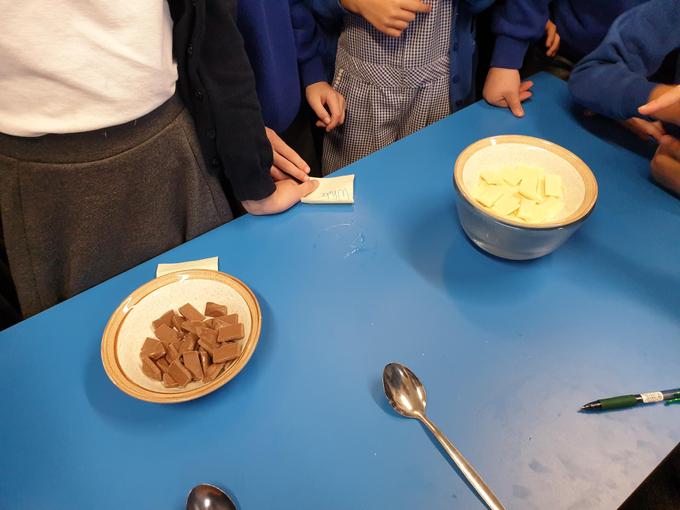 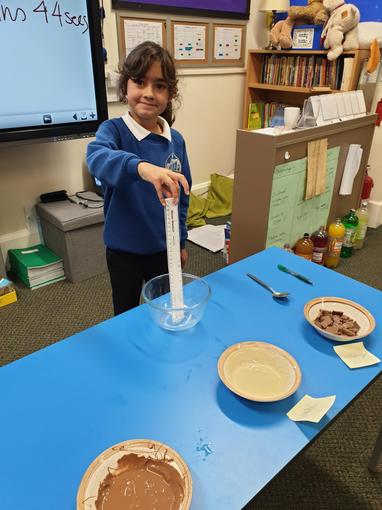 Buzzards class have worked hard at developing lots of different skills in Gymnastics. They have explored the different positions, flight, stretching and mirroring individually and with partners.

If you want to see real Ancient Egyptian Artefacts then one of the *BEST* places to see them is at the British Museum in London.

The Museum is free, which is great. It also holds the largest collection of Egyptian objects outside Egypt.

Highlights include the Rosetta Stone, a 5,000 year old sand-dried mummy, wall paintings from Nebamun’s tomb and sculptures of Ramesses II.

Something to consider is TUTANKHAMUN: Treasures of the Golden Pharaoh

In residence at the Saatchi Gallery from Saturday 2 November 2019 - Sunday 3 May 2020, the exhibition commemorates the 100th anniversary of the discovery of Tutankhamun's tomb, and is the final chance to see these world heritage artefacts before they return to Egypt forever.

Explore the life of King Tutankhamun through more than 150 pieces from the tomb. This is three times the quantity that has travelled in previous exhibitions - more than 60 of which are travelling outside of Egypt for the first time.

This is a very rare opportunity to experience the wonder and mystery of the king before these priceless objects return to Egypt forever.

BE THE BEST FRIDAYS

Every half term, each individual Year Group works with a teacher or skilled adult to complete an exciting project. They may do forest school, sewing, PE, etc..

Currently, the Year 4s are working will Miss Mills on a community based project.

The Year 3s are working with myself to complete a large scale art project.

Last week, the pupils went around the school looking for locations to put a piece of artwork. This week they came up with possible designs for that artwork.

Keep an eye out!

In History, our focus will ANCIENT EGYPT. This will include finding out about Ancient Egyptian life from the mighty pharaoh to the humble farmer. Here are some questions to get you thinking:

HOW LONG AGO WAS THE ANCIENT EGYPT?

WHAT ARTEFACTS CAN WE LOOK AT TO HELP US FIND OUT ABOUT THEM?